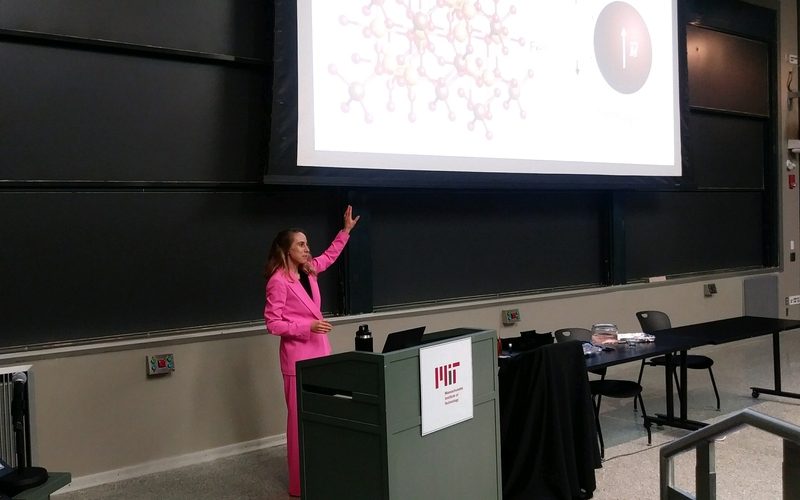 Professor Polina Anikeeva’s innovation in the treatment of neurological disorders highlights the interdisciplinary nature of her field.

A pivotal moment in Polina Anikeeva’s career was when she looked at an MRI scan of Parkinson’s disease patient, about a decade ago.

Now professor of materials science and engineering and brain and cognitive sciences at MIT, Anikeeva had recently worked on optoelectronics, devices that can detect and control light, and her work was used to illuminate the quantum-dot displays on Samsung TVs. But Anikeeva’s research interests started to stray into biology and neuroscience, disciplines outside her immediate orbit.

“I wanted to apply my knowledge as a materials scientist and engineer to problems that were unsolved, to devices that didn’t exist,” said Anikeeva on April 22, while delivering the Department of Materials Science and Engineering’s twice-yearly Wulff Lecture.

She found those problems in nervous system disorders such as Parkinson’s. In Parkinson’s disease, neurons that produce the neurotransmitter dopamine in the brain begin to die off. Patients often have difficulty controlling or initiating movement, and symptoms get worse over time. Drugs help, but stop working after several years.

Deep brain stimulation (DBS) therapy is often the last resort. It has promising results; patients who undergo DBS often can better control their movement. But the procedure, involving placing electrodes into the brain, can have profound side effects, including a change in personality. There are two problems: the first is size. Electrodes are a thousand times larger than the brain cells they’re trying to stimulate. Complexity is an even bigger problem, Anikeeva said: different cells have different functions. “And if you’re stimulating all of them at once, you don’t know what’s going to happen.”

Anikeeva and her research team draw from disciplines as diverse as materials science, neuroscience, and telecommunications to improve treatment for nervous system disorders. In pursuit of that goal, they’ve developed neural probes that match the brain’s physiology, so they can stimulate brain cells without causing damage to delicate tissues.

At last month’s public event, targeted toward first-year students, Anikeeva was introduced by DMSE department head Jeff Grossman, who gave a brief introduction to materials sciences and engineering. “We build matter from the atom up,” he said. The goal is to build materials with better properties and performance. “And we think about how to do that from a really broad range of other disciplines and ways of thinking.”

The Wulff Lecture series, created in 1977, honors John Wulff, a longtime MIT materials science professor who spearheaded the popular course 3.091 (Introduction to Solid State Chemistry). The idea of the series is to “inspire anyone who’s interested in understanding what our discipline does, what our discipline is about, why it’s exciting and impactful,” Grossman said.

Throughout her lecture, Anikeeva credited any impact her work could have on society on the interdisciplinary nature of materials science — the willingness to look to other fields for answers to hard-to-crack problems.

For example, figuring out how to trigger the right neuron would come from microbiology. Anikeeva turned to the work of a Stanford University bioengineering team that applied proteins from a microorganism called Chlamydomonas reinhardtii, a single-cell algae that uses light to propel hairlike appendages called flagella and swim. That same, light-driven mechanism can be used to stimulate a particular neuron. It’s a neuroscience research method known as optogenetics.

“We can now manipulate neurons that we want by using light and leave the rest — bystander neurons — alone, avoiding side effects,” Anikeeva said.