Skip to content
Home » News » Uncategorized » How we tune out distractions 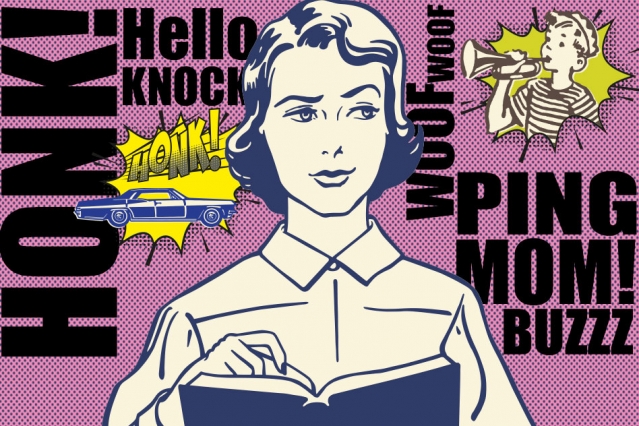 Imagine trying to focus on a friend’s voice at a noisy party, or blocking out the phone conversation of the person sitting next to you on the bus while you try to read. Both of these tasks require your brain to somehow suppress the distracting signal so you can focus on your chosen input.

MIT neuroscientists have now identified a brain circuit that helps us to do just that. The circuit they identified, which is controlled by the prefrontal cortex, filters out unwanted background noise or other distracting sensory stimuli. When this circuit is engaged, the prefrontal cortex selectively suppresses sensory input as it flows into the thalamus, the site where most sensory information enters the brain.

“This is a fundamental operation that cleans up all the signals that come in, in a goal-directed way,” says Michael Halassa, an assistant professor of brain and cognitive sciences, a member of MIT’s McGovern Institute for Brain Research, and the senior author of the study.

The researchers are now exploring whether impairments of this circuit may be involved in the hypersensitivity to noise and other stimuli that is often seen in people with autism.

Our brains are constantly bombarded with sensory information, and we are able to tune out much of it automatically, without even realizing it. Other distractions that are more intrusive, such as your seatmate’s phone conversation, require a conscious effort to suppress.

In a 2015 paper, Halassa and his colleagues explored how attention can be consciously shifted between different types of sensory input, by training mice to switch their focus between a visual and auditory cue. They found that during this task, mice suppress the competing sensory input, allowing them to focus on the cue that will earn them a reward.

This process appeared to originate in the prefrontal cortex (PFC), which is critical for complex cognitive behavior such as planning and decision-making. The researchers also found that a part of the thalamus that processes vision was inhibited when the animals were focusing on sound cues. However, there are no direct physical connections from the prefrontal cortex to the sensory thalamus, so it was unclear exactly how the PFC was exerting this control, Halassa says.

In the new study, the researchers again trained mice to switch their attention between visual and auditory stimuli, then mapped the brain connections that were involved. They first examined the outputs of the PFC that were essential for this task, by systematically inhibiting PFC projection terminals in every target. This allowed them to discover that the PFC connection to a brain region known as the striatum is necessary to suppress visual input when the animals are paying attention to the auditory cue.

Further mapping revealed that the striatum then sends input to a region called the globus pallidus, which is part of the basal ganglia. The basal ganglia then suppress activity in the part of the thalamus that processes visual information.

Using a similar experimental setup, the researchers also identified a parallel circuit that suppresses auditory input when animals pay attention to the visual cue. In that case, the circuit travels through parts of the striatum and thalamus that are associated with processing sound, rather than vision.

The findings offer some of the first evidence that the basal ganglia, which are known to be critical for planning movement, also play a role in controlling attention, Halassa says.

The researchers also found that the same circuits are employed not only for switching between different types of sensory input such as visual and auditory stimuli, but also for suppressing distracting input within the same sense — for example, blocking out background noise while focusing on one person’s voice.

The team also showed that when the animals are alerted that the task is going to be noisy, their performance actually improves, as they use this circuit to focus their attention.

“This study uses a dazzling array of techniques for neural circuit dissection to identify a distributed pathway, linking the prefrontal cortex to the basal ganglia to the thalamic reticular nucleus, that allows the mouse brain to enhance relevant sensory features and suppress distractors at opportune moments,” says Daniel Polley, an associate professor of otolaryngology at Harvard Medical School, who was not involved in the research. “By paring down the complexities of the sensory stimulus only to its core relevant features in the thalamus — before it reaches the cortex — our cortex can more efficiently encode just the essential features of the sensory world.”