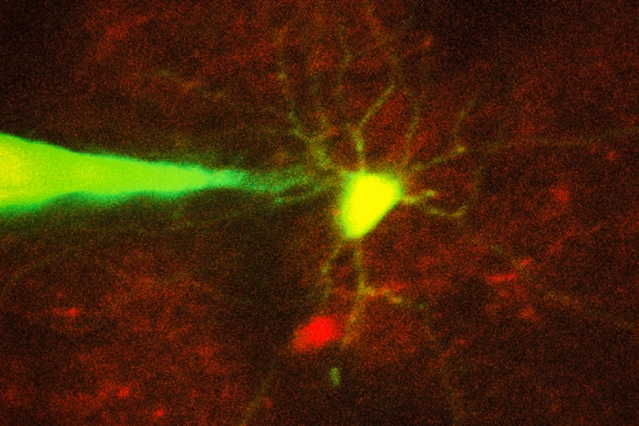 To make this technique more widely available, MIT engineers have now devised a way to automate the process, using a computer algorithm that analyzes microscope images and guides a robotic arm to the target cell.

This technology could allow more scientists to study single neurons and learn how they interact with other cells to enable cognition, sensory perception, and other brain functions. Researchers could also use it to learn more about how neural circuits are affected by brain disorders.

“Knowing how neurons communicate is fundamental to basic and clinical neuroscience. Our hope is this technology will allow you to look at what’s happening inside a cell, in terms of neural computation, or in a disease state,” says Ed Boyden, an associate professor of biological engineering and brain and cognitive sciences at MIT, and a member of MIT’s Media Lab and McGovern Institute for Brain Research.

Boyden is the senior author of the paper, which appears in the Aug. 30 issue of Neuron. The paper’s lead author is MIT graduate student Ho-Jun Suk.

For more than 30 years, neuroscientists have been using a technique known as patch clamping to record the electrical activity of cells. This method, which involves bringing a tiny, hollow glass pipette in contact with the cell membrane of a neuron, then opening up a small pore in the membrane, usually takes a graduate student or postdoc several months to learn. Learning to perform this on neurons in the living mammalian brain is even more difficult.

There are two types of patch clamping: a “blind” (not image-guided) method, which is limited because researchers cannot see where the cells are and can only record from whatever cell the pipette encounters first, and an image-guided version that allows a specific cell to be targeted.

Five years ago, Boyden and colleagues at MIT and Georgia Tech, including co-author Craig Forest, devised a way to automate the blind version of patch clamping. They created a computer algorithm that could guide the pipette to a cell based on measurements of a property called electrical impedance — which reflects how difficult it is for electricity to flow out of the pipette. If there are no cells around, electricity flows and impedance is low. When the tip hits a cell, electricity can’t flow as well and impedance goes up.