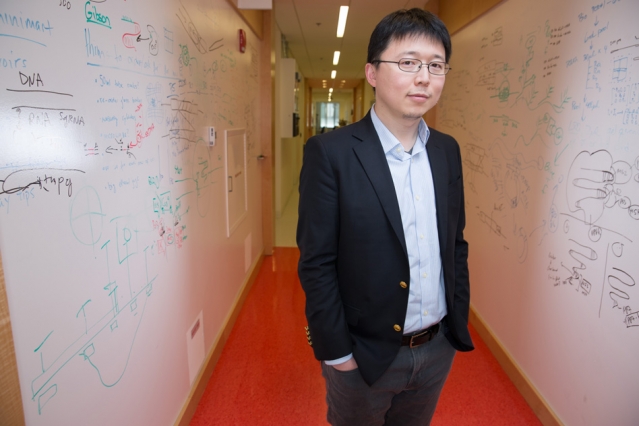 In 2011, about a month after joining the MIT faculty, Feng Zhang attended a talk by Harvard Medical School Professor Michael Gilmore, who studies the pathogenic bacteriumEnteroccocus. The scientist mentioned that these bacteria protect themselves from viruses with DNA-cutting enzymes known as nucleases, which are part of a defense system known as CRISPR.

“I had no idea what CRISPR was but I was interested in nucleases,” Zhang says. “I went to look up CRISPR, and that’s when I realized you might be able to engineer it for use for genome editing.”

Zhang devoted himself to adapting the system to edit genes in mammalian cells and recruited new members to his nascent lab at the Broad Institute of MIT and Harvard to work with him on this project. In January 2013, they reported their success in the journal Science.

Since then, scientists in fields from medicine to plant biology have begun using CRISPR to study gene function and investigate the possibility of correcting faulty genes that cause disease. Zhang now heads a lab of 19 scientists who continue to develop the system and pursue applications of genome editing, especially in neuroscience.

“The goal is to try to make our lives better by developing new technologies and using them to understand biological systems so that we can improve our treatment of disease and our quality of life,” says Zhang, W. M. Keck Career Development Associate Professor in Biomedical Engineering and a member of MIT’s McGovern Institute for Brain Research. Zhang recently earned tenure in MIT’s Departments of Biological Engineering and Brain and Cognitive Sciences.

Growing up in Des Moines, Iowa, where his parents moved from China when he was 11, Zhang had plenty of opportunities to feed his interest in science. He participated in Science Bowl competitions and took special Saturday science classes, where he got his first introduction to molecular biology. Experiments such as extracting DNA from strawberries and transforming bacteria with genes for drug resistance whetted his appetite for genetic engineering, which was further stimulated by a showing of “Jurassic Park.”

“That really caught my attention,” he recalls. “It didn’t seem that far-fetched. I guess that’s what makes it good science fiction. It kind of tantalizes your imagination.”