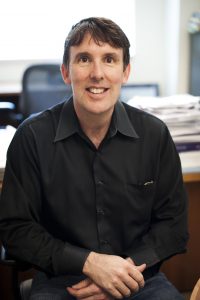 Talk Title: The structure of pragmatic reasoning and the scope of the communicative impairment in ASD.
Abstract: Language comprehension entails more than simply decoding the literal meaning of an utterance: our interpretation is powerfully shaped by the perceived intent of the speaker, the linguistic and social context of the utterance, and our general world knowledge. This ability to exploit speaker intent and background knowledge to go beyond the literal meaning is referred to as “pragmatics”, and is at the core of communicative success. The term “pragmatics”, as used in the literature, encompasses a wide range of diverse phenomena, from irony and sarcasm, to understanding scalar implicatures, to using prosodic cues, to making world-knowledge-based inferences. In an ongoing project, we are using an individual-differences approach to investigate the structure of mental processes relevant to pragmatic reasoning. To do this, we developed an extensive battery consisting of 20 tasks that tap 11 distinct phenomena. Across a large sample of neurotypical adults (n=~400) tested on Mechanical Turk, factoring out IQ, we discovered a remarkably clear clustering of tasks into sensible categories. The biggest category included phenomena that appear to involve higher-order expectations about social norms, like irony, white lies, and humor. Other categories included world-knowledge-based inferences, prosodic processing, and understanding scalar implicatures. We then asked which of these components of pragmatic reasoning are impaired in individuals with ASD. In a sample of 18 participants (data collection ongoing), we found impairments in a) the component that deals with higher-order expectations about social norms, and b) world-knowledge-based inferences, but not in prosodic processing or understanding scalar implicatures. Thus, we are making some progress in both carving up the mental architecture of pragmatic processing, and trying to delineate the scope of the communicative impairment in ASD.