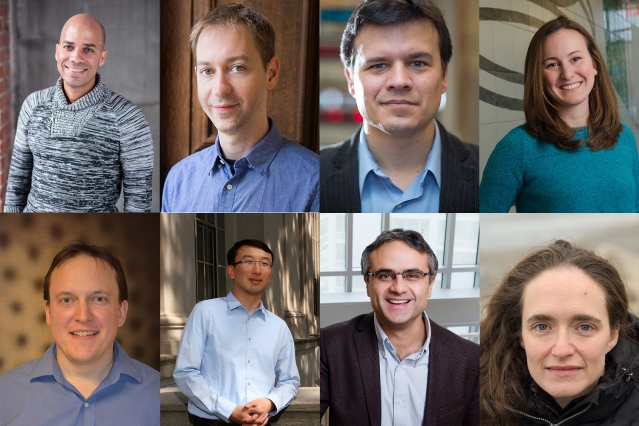 The School of Science announced that eight of its faculty members have been appointed to named professorships. These positions afford the faculty members additional support to pursue their research and develop their careers.

Eliezer Calo, assistant professor in the Department of Biology, has been named the Irwin W. and Helen Sizer Career Development Professor. He focuses on the coordination of RNA metabolism using a combination of genetic, biochemical, and functional genomic approaches. The core of Calo’s research program is to understand how ribosome biogenesis is controlled by specific RNA binding proteins, particularly RNA helicases of the “DEAD box” family, and how disregulation of ribosome biogenesis contributes to various diseases, including cancer. He proposes initially to characterize the functions of specific genes of interest, including the DDX21 RNA helicase and the TCOF1 factor involved in RNA Pol I transcription and rRNA processing, using biochemical, molecular and genome-wide approaches in mouse, Xenopus and Zebrafish models.

Steven Flavell, assistant professor in the Department of Brain and Cognitive Sciences, has been named the Lister Brothers Career Development Professor. He uses Caenorhabditis elegans to examine how neuromodulators coordinate activity in neural circuits to generate locomotion behaviors linked to the feeding or satiety states of an animal. His long-term goal is to understand how neural circuits generate sustained behavioral states, and how physiological and environmental information is integrated into these circuits. Gaining a mechanistic understanding of how these circuits function will be essential to decipher the neural bases of sleep and mood disorders.

Pablo Jarillo-Herrero, the Cecil and Ida Green Professor of Physics, explores quantum transport in novel condensed-matter systems such as graphene, transition metal dichalcogenides and topological insulators. In recent work, he has demonstrated the presence of a bandgap in graphene-based van der Waals heterostructures, novel quantum spin Hall and photothermoelectric effects in graphene, as well as light-emitting diodes, photodetectors and solar cells in the atomically thin tungsten diselenide system. He has also made advances in characterizing and manipulating the properties of other ultrathin materials such as ultrathin graphite and molybdenum disulphide, which lack graphene’s ultrarelativistic properties, but possess other unusual electronic properties.

Becky Lamason, assistant professor in the Department of Biology, has been named the Robert A. Swanson (1969) Career Development Professor of Life Sciences. She investigates how intracellular bacterial pathogens hijack host cell processes to promote infection. In particular, she studies how Rickettsia parkeri and Listeria monocytogenes move through tissues via a process called cell-to-cell spread. She utilizes cellular, molecular, genetic, biochemical, and biophysical approaches to elucidate the mechanisms of spread in order to reveal key aspects of pathogenesis and host cell biology.

Rebecca Saxe, the inaugural John W. Jarve (1978) Professor in Brain and Cognitive Sciences, is best known for her discovery of a brain region that is specialized for “theory of mind,” people’s ability to think about the thoughts, beliefs, plans, hopes and emotions of other people. Saxe continues to study this region and its role in social cognition, and is exploring the theory-of-mind system as a promising candidate for understanding the biological basis of autism. She also studies brain development in human babies, including her own.