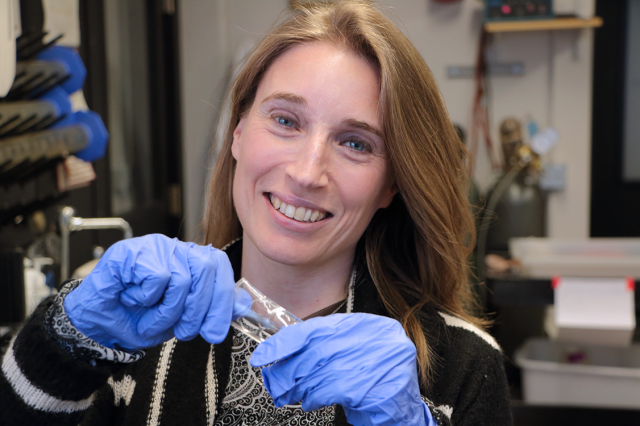 With joint appointments in the departments of Materials Science and Engineering and Biological Engineering, MIT Associate Professor Krystyn J. Van Vliet brings a materials scientist’s understanding of mechanical triggers for biochemical behavior. Although her group studies many non-biological materials that also show this coupling between chemistry and mechanics, biological cells and tissues are especially complex. She studies stem cells from the central nervous system and from bone marrow, as well as tissues from the brain, heart, and liver.
In recent work, Van Vliet’s group has shown that three biophysical markers — size, mechanical stiffness, and how much the nucleus inside the cell moves around — can accurately identify stem cells in a mixed group of cells; engineered polymers that can mimic the response of human tissue to high rates of loading; and established that measurements of cell fluidity, a mechanical property that ranges from 0 to 1, can detect cell responses to different chemical triggers such as salinity or physical triggers such as temperature.
Stem cells hold promise for a procedure known as cellular therapy, in which a person’s own stem cells can fight disease or repair tissue damage — regrowing bone, for example. Alternatively, the cells can be used as factories to produce key chemicals that are collected to act as the medicine. The challenge, Van Vliet says, is that stem cells naturally occur in small numbers in our bodies. “Roughly 1 in 100,000 of the cells that are in our bone marrow are actually the bone marrow-derived stem cells,” she explains. “The rest are other cell types; so it’s called a rare cell type.”
Although a stem cell line can be grown, or expanded, in the lab from 100 cells to a million cells, a common problem is that over time the cells change properties. “Instead of them all being stem cells, after several generations of growing in the lab, some of them are stem cells, but many of them are not. So if you want to use them for human therapy, how do you sort out the cells that are still stem cells? You want to do that in a way that you don’t have to, ideally, touch the cells or put any other proteins or particles on them to enable the separation. So we sought a method of what’s called ‘label-free sorting,'” Van Vliet says.
Separating stem cells
In a 2014 paper, Van Vliet and colleagues demonstrated that sought-after bone marrow stem cells could be separated from a large group of cells using a spiral-shaped inertial microfluidic device and sorted by function based on a combination of three identifying characteristics: small cell diameter, low cell stiffness and high nuclear-membrane fluctuations. “We measured those three properties as well as several other properties, but only those three properties together, that triplet of properties, distinguished a stem cell from a non-stem cell,” Van Vliet explains.
“We don’t have to label the cells, we don’t have to put any particles on them, or any fluorescent antibodies on them. Just on the basis of these three physical and mechanical properties, we can say, this fraction of cells grown in the lab are still the stem cells, that you can put back in a human,” Van Vliet adds. The study used human cells but tested them in mice.