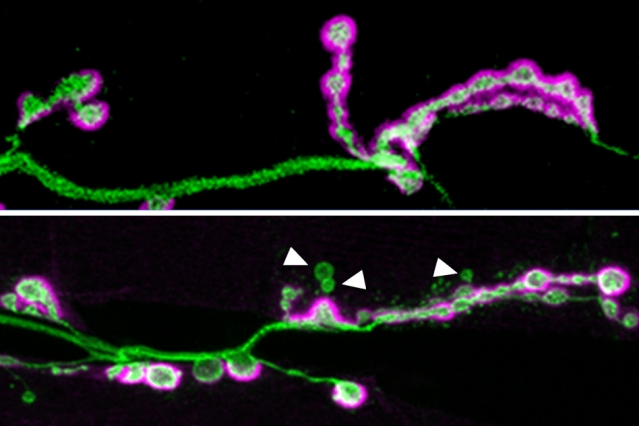 A new study from MIT neuroscientists reveals that a gene mutation associated with autism plays a critical role in the formation and maturation of synapses — the connections that allow neurons to communicate with each other.

Many genetic variants have been linked to autism, but only a handful are potent enough to induce the disorder on their own. Among these variants, mutations in a gene called Shank3 are among the most common, occurring in about 0.5 percent of people with autism.

Scientists know that Shank3 helps cells respond to input from other neurons, but because there are two other Shank proteins, and all three can fill in for each other in certain ways, it has been difficult to determine exactly what the Shank proteins are doing.

“It’s clearly regulating something in the neuron that’s receiving a synaptic signal, but some people find one role and some people find another,” says Troy Littleton, a professor in the departments of Biology and of Brain and Cognitive Sciences at MIT, a member of MIT’s Picower Institute for Learning and Memory, and the senior author of the study. “There’s a lot of debate over what it really does at synapses.”

Key to the study is that fruit flies, which Littleton’s lab uses to study synapses, have only one version of the Shank gene. By knocking out that gene, the researchers eliminated all Shank protein from the flies.

“This is the first animal where we have completely removed all Shank family proteins,” says Kathryn Harris, a Picower Institute research scientist and lead author of the paper, which appears in the May 25 issue of the Journal of Neuroscience.

Scientists already knew that the Shank proteins are scaffold proteins, meaning that they help to organize the hundreds of other proteins found in the synapse of a postsynaptic cell — a cell that receives signals from a presynaptic cell. These proteins help to coordinate the cell’s response to the incoming signal.