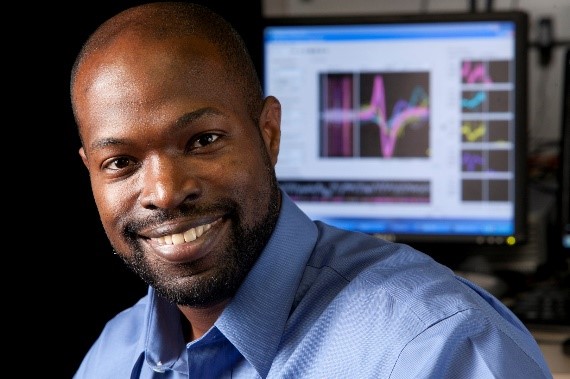 Date: Wednesday, April 14, 2021
Location: Zoom Webinar – Registration Required
Register in advance for this webinar: click here
* After registering, you will receive a confirmation email containing information on how to join the webinar.

Talk title: Mapping Emotions: Discovering structure in mesoscale electrical brain recordings
Abstract: Many cortical and subcortical regions contribute to complex social behavior; nevertheless, the brain architecture whereby the brain integrates this information to encode rewarding socioemotional behavior remains unknown. Here we measure electrical activity from eight brain regions as mice engage in a social preference assay. We then use machine learning to discover an explainable brain network that encodes the extent to which mice choose to engage another mouse. This socioemotional network is organized by theta oscillations leading from prelimbic cortex and amygdala that converge on ventral tegmental area, and network activity is synchronized with brain-wide cellular firing. The network generalizes, on a mouse-by-mouse basis, to encode socioemotional behaviors in healthy animals, but fails to encode an appetitive socioemotional state in clinically relevant animal models of social dysfunction.  Thus, our findings reveal the architecture whereby the brain integrates spatially distributed activity across timescales to encode an appetitive socioemotional brain state in health and disease.

Click here to view the recording of the talk

Kafui Dzirasa completed a PhD in Neurobiology at Duke University. His research interests focus on understanding how changes in the brain produce neurological and mental illness, and his graduate work has led to several distinctions including: the Somjen Award for Most Outstanding Dissertation Thesis, the Ruth K. Broad Biomedical Research Fellowship, the UNCF·Merck Graduate Science Research Fellowship, and the Wakeman Fellowship. Kafui obtained an MD from the Duke University School of Medicine in 2009, and he completed residency training in General Psychiatry in 2016.

Kafui received the Charles Johnson Leadership Award in 2007, and he was recognized as one of Ebony magazine’s 30 Young Leaders of the Future in February 2008. He has also been awarded the International Mental Health Research Organization Rising Star Award, the Sydney Baer Prize for Schizophrenia Research, and his laboratory was featured on CBS 60 Minutes in 2011. In 2016, he was awarded the inaugural Duke Medical Alumni Emerging Leader Award and the Presidential Early Career Award for Scientists and Engineers: The Nation’s highest award for scientists and engineers in the early stages of their independent research careers. In 2017, he was recognized as 40 under 40 in Health by the National Minority Quality Forum, and the Engineering Alumni of the Year from UMBC. He was induced into the American Society for Clinical Investigation in 2019.

Kafui is an Associate Professor at Duke University with appointments in the Departments of Psychiatry and Behavioral Sciences, Neurobiology, Biomedical Engineering, and Neurosurgery. His ultimate goal is to combine his research, medical training, and community experience to improve outcomes for diverse communities suffering from Neurological and Psychiatric illness.